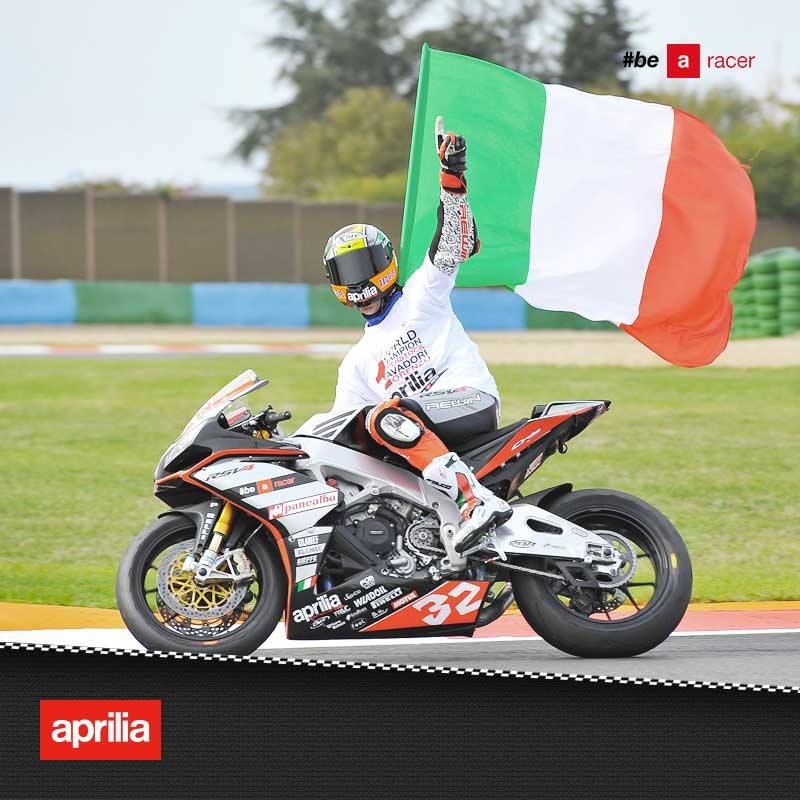 Magny Cours (France), October 4th 2015
The dream comes true, Lorenzo Savadori is World Superstock Champion!!
The young talent equipped with FALCO Eso Pro 2 boots is an accountant at Magny Cours and carries Aprilia to first title in Superstock 1000 FIM Cup. The first constructors' title in this category for the highly decorated italian brand,.
The weekend across the Alps is the usual puzzle for the weather: wet qualifying and the cancellation of the warm-up advise Savadori for maximum careful in race. In two rounds after start Lorenzo "Il Magnifico" grabs the second position with precise overtake on Guarnoni (Yamaha). After Jezek's stop at fifth lap, Savadori controls the group. The Aprilia rider uses strategy and voluntarily moves back to ninth place. Eight and a half laps in total control to checkered flag and the title is safe. On the finish line Guarnoni, Calia and De Rosa conquer the podium, Tamburini is only fifth: the party for the New M2 Racing Team and the new world champion begins.
Lorenzo Savadori #32: "We had the pace to center the victory but the only real objective of the day was the conquest of the world title. A strategy shared with the team and my staff, zero risk, pushing hard at the start of the race to shell the group and retreat in a quiet area in the closing stages. A title that I dedicate to many people, first of Aprilia for the excellent work in this extraordinary 2015. All the guys from the New M2 Racing Team, my family, the Lorenzo Savadori # 32 Staff, sponsors, my manager Lucio Pedercini, my friends, everyone has contributed with its own brick to the most important triumph of my career".