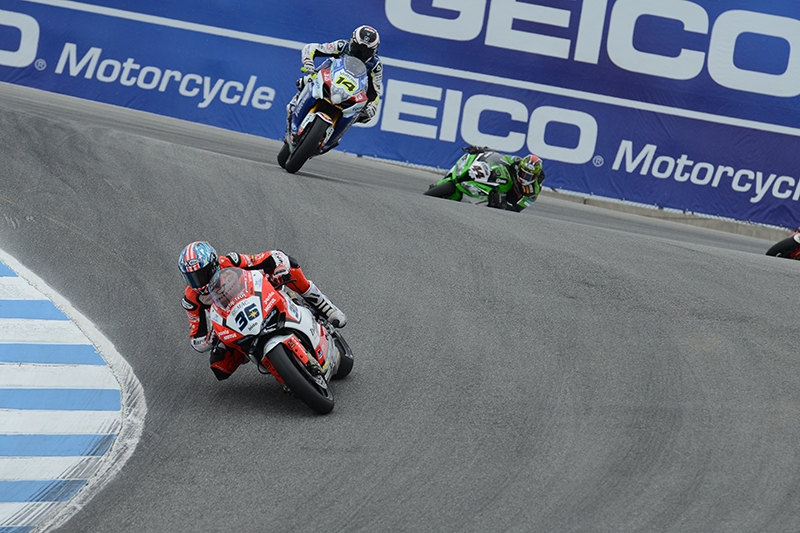 Laguna Seca (U.S.A.), July 19th 2015
Top ten finishes of Leandro Tati Mercado (Team Barni Ducati) at the spectacular american track of Laguna Seca.
The stars and stripes weekend had a beginning that was anything but easy, due to a crash of the Argentinean during FP2, which caused him not only to miss the whole run but also the fracture of a toe of his left foot. After a wet warm up, Race 1 was held in dry condition. After a good start from fifth row the Barni Racing Team flag-bearer started immediately his come back, overtaking Camier (MV Agusta), Ramos (Kawasaki), De Puniet (Suzuki) e Salom (Kawasaki). As he got behind Vd Mark (Honda), in ninth position, Mercado continued to push, but in the second half of the race, a suddenly drop of the rear tyre performance forced him to lower his pace and to manage the rest of the competition till the finish line.
Mercado ended with the ninth place also an incredible Race 2, which saw an early exit from the scene of some of the main protagonists like Giugliano (Ducati), victim of a highside, and the former world champion Guintoli (Honda). Just after the start, a soft rain started to pour on Monterey circuit, making difficult and slippery the track condition, which wasn’t wet enough to require a tyre change. Despite the risky conditions , the Argentinean managed to conserve a fast and constant rhythm, maintaining the 9th position till the checkered flag.
Leandro Mercado, #36: "Considering the hard beginning that we had this weekend, I am certainly pleased with the results obtained here in Laguna Seca. At the beginning of Race 1 I did many overtakes till getting behind Vd Mark. I had a good rhythm and I was managing to fill in the gap, but then the rear tyre had a drop and this didn’t make possibile to push any further to catch him. Before Race 2, we did a change in order to spare the tyres and it did work allowing me to maintain a constant rhythm during all the race, but with the rain during the first laps the condition were really difficult. The riders in front of me had my same pace and it was not possible for me to catch them. I would like to thank all the team for the great job and everyone that supports me. In two weeks we will be on another new track in Malaysia, but we are thrilled and ready to face this challenge!"
Matteo Baiocco (Team Althea Ducati) returns home dissatisfied of his races: in race 1 due to a withdraw due to clutch jamming technical issues. In race 2 the team decided to change many of the bikes’ components and the Team Althea rider took to the grid anxious to bring home a strong result but Baiocco surely suffered as a result of his inexperience at this track and the lack of kilometres clocked up contributed to the race 1 stop. He found himself in a complicated situation when rain appeared unexpectedly and his only aim at that point was to complete the race as best he could. In the end he did not complete exactly the race that he and his Team had hoped for but that’s the way it went today. He crossed the line in thirteenth position. Baiocco and his bike still have eight more races in which to express their potential, having seen highs and lows during the season thus far.
Cautious approach to Laguna Seca's tricky curves paid-off to Chris Ponsson (Team Pedercini Kawasaki) that climbed 3 spots in both races, reaching respectively the 14th position and 15th final positions storing other valuable experience.
The next event is scheduled for Sunday, August 2nd in Malaysia, the Sepang circuit.In two weeks, on the 2nd August, the three FALCO riders will be back on track for the tenth seasonal appointment on the Malaysian track of Sepang.