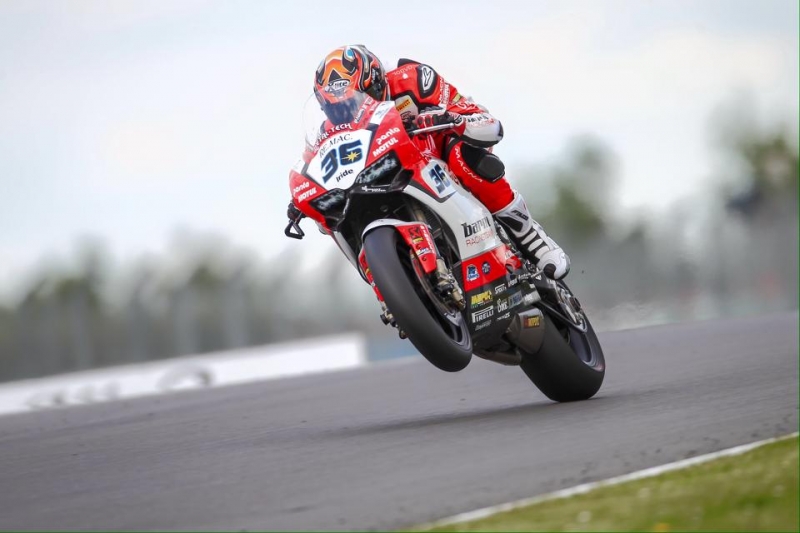 Donington Park (UK) - 24th May 2015
For its sixth seasonal round, the Eni FIM Superbike World Championship 2015 stopped this weekend at the historical Donington Park circuit, right where in 1988 the championship officially took off.
Despite the first difficulties on a new track which alternates a first really fast part to a very slow last sector, Leandro Mercado (ARG, Team Barni Ducati) managed to defend in the best way possible, concluding with a good 11th place Race 1 and ending 13th Race 2.
Leandro Mercado #36: "It has been a very difficult weekend. Unfortunately we weren’t able to find the right way to be fast also on this track. In Race 1 I had a good rhythm and I remained with Salom and Ramos. Before Race 2 we did other changes to improve the grip, but unfortunately they were worthless: in order to avoid Terol’s crash I went on the grass and I lost a lot of time, then I made a mistake and I finally ended thirteenth. Even if this weekend didn’t go as we expected, we completed both competitions anyway and this experience will be useful for the future! I would like to thank all the team for the great work done. We will try it again in Portimao!"
Unable to find much grip, partly due to the track’s characteristics and partly due to the Ducati's Matteo Baiocco (IT, Team Ducati Althea) did the best to perform successfully but unfortunately in race 1, while pushing to catch up, he crashed while in 9th position while in race 2 he ended 10th, collecting more good points for the championship in which he currently positions seventh.
Matteo Baiocco #15: “I’m sorry I didn’t do as well as I’d hoped in the races. In race 1 I unfortunately crashed and in race 2 I preferred not to risk making further mistakes. The team has worked really hard and now I go to Portimao with a good base from which to continue working.”
After two positive starts WSBK rookie Chris Ponsson (FR, Team Pedercini Kawasaki) on his second round with the new team could only perform respectively a 16th and a DNF positions.
Chriss Ponsson #23: This morning, I made a good warm-up and I was confident before the first race. For the first race, I made a good start but I was pushed off the track and I lost several places. My pace was not so good and I finished the race in 16th position due to this mistake which cost me at least ten seconds. The start of the second race was much better. I found myself in a small group fighting for the points. To stay with that group, I pushed too hard until I made a small mistake in the last corner. I'm really disappointed because the weekend was particularly good. We will do as good or better in two weeks time in Portimao."