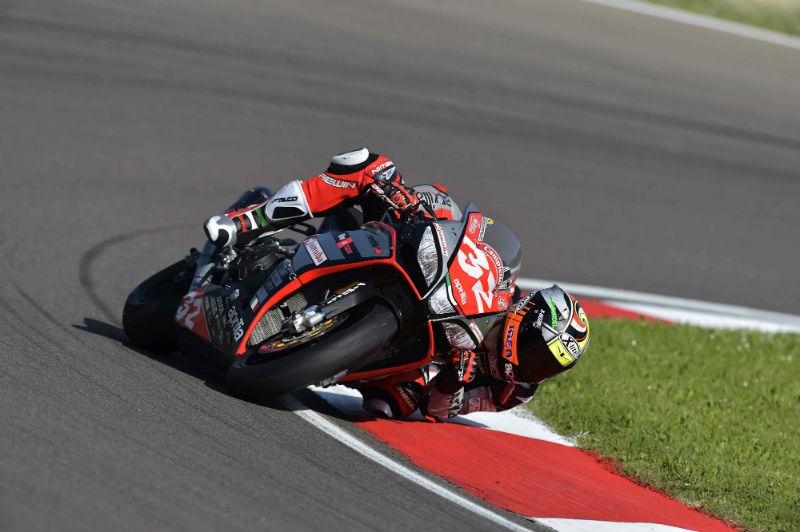 Imola (Italia) - 10 Maggio 2015
At Imola's track Savadori (Nuova M2 Aprilia Racing) wrapped-up the second consecutive triumph for the rider from Cesena gaining more points also in the overall Championship standing. On a difficult day for other FALCO Superstock riders (Guarnoni sixth, Staring and Lussiana withdrawn for crashing) Lorenzo Savadori made peace with Imola occupying the top step of podium in the third stage of Superstock 1000 FIM Cup. After Assen victory the italian talent reised the tricolor flag in front of his home crowd. Less than two laps to dictate hierarchies, over twelve rounds to display the Aprilia RSV4-RF bike maxi-spot. Started from box number four on the grid (1'49.572) Savadori easily earn third place behind the duo Calia-Jezek. Between the eighth and ninth around the masterpiece of strategy is made with the gap that rises in the order of two seconds over his followers. Game, set, match, Savadori administers and ends race under the checkered flag wheeling. Lorenzo Savadori: "A great victory gained after a whole weekend of hard teamwork. Good start, good race pace on a very difficult track where the team has met my every need entrusting a winning RSV4-RF. This success is for the father of a dear friend who passed away just this week. Thanks to all the team Nuova M2 Racing Aprilia Racing, my family, my staff composed of boys of Imola, the sponsors and the fans that gave me a day to get goose bumps. "