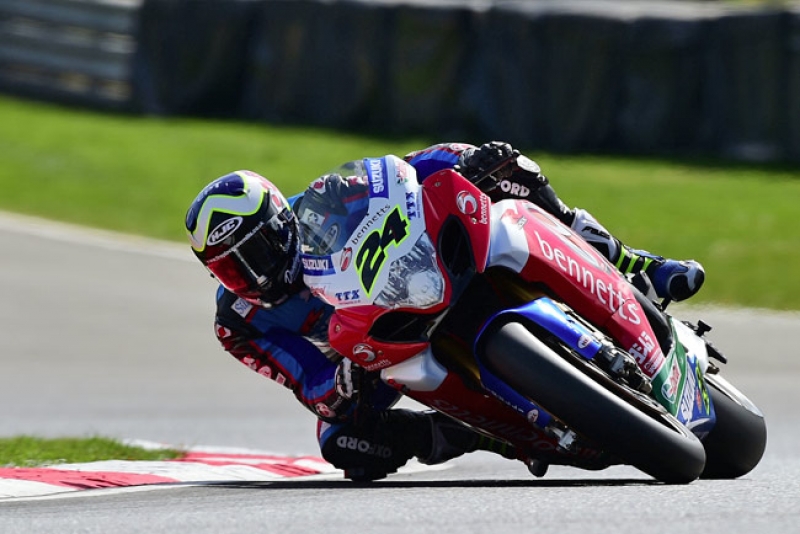 Brands Hatch - April 20th 2015
Christian Iddon pushed through the pain barrier at Brands Hatch for the second round of the MCE British Superbike Championship, after breaking his leg on the opening lap of the first race.
The Bennetts Suzuki rider, who made a strong start from his third row grid spot, suffered a nasty highside at Graham Hill on the first lap of the opening race. Coming down on the track, Iddon was clipped by the WD40 Kawasaki of Jack Kennedy which resulted in a broken fibula in his right leg. However, after pleasing the medical staff in the compulsory fitness tests, he was passed fit to race and battled to a 12th placed finish in race two.
Christian Iddon said, "Not the race-day we wanted obviously. Yesterday we were really happy and did an amazing lap time. We made some tweaks in warm up and I was really happy but then on the first lap went and spat myself off. I was pretty much upright and so far out the corner I crashed on 97% throttle, so not really sure what happened. I knew as soon as I was out the seat I was in trouble, not from my crash but from what was happening behind and I could see Jack [Kennedy] doing everything to stop. It's a pretty clean break and I was passed fit to race, but on the sighting lap I didn't think I'd be able to. We lowered the foot rest and added some seat foam as I couldn't get my leg up. I was a bit wonky but knew on the warm lap I could race. I did my best to get some points and keep us in the hunt for the showdown. We came strong toward the end of the race and I could make some passes, so not bad considering."
Next BSB round is due at Oulton Park on May 2nd-3rd.