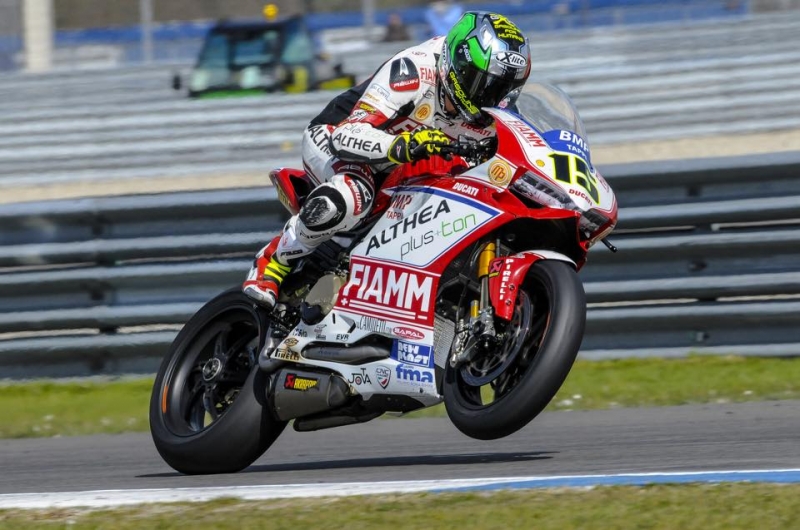 Assen  – April 19th 2015
After just one week after Aragón round, the spectacular fast corners and breath-taking camber-corners of the historical TT of Assen hosted this weekend the 4th Round of 2015 World Superbike Championship, where Leandro Mercado was able to achieve a solid eleventh place on Race 1 and to end fourteenth on Race 2, collecting important points for the overall championship standings. The Dutch weekend unveiled to be far from easy for the Argentinian rider as the track known as "The Cathedral of Motorcycle“ immediately put Mercado and the Barni Racing Team technicians under deep test: a demanding track to ride on with its 11 right-handed and 6 left-handed corners amounting to a total of 4.542 km, but especially a technical layout, where finding the right setting for the bike can be the key card for the weekend. In spite of the result below the real expectations, Leandro Mercado and the Barni Racing Team concluded the fourth round collecting again championship points and leaving well aware of the experience made, useful to go on with their constant growth after a demanding but formative weekend. Tati #36 commented as following: “We did know that this wouldn’t have been an easy weekend so we started already prepared to learn us much as possible from this experience. Race 1 was really thought, then during the second race we made a significant change that improved my feeling with the bike. I was able to find the right pace and to put myself into the condition to battle for the 10th place, but with 2 laps to go, unfortunately I slid in 14th position. These are the races and this is the World Superbike championship. Today experience will be useful to us to grow even more and to improve during the next races. I would like to thank all the team for the great job done during the whole weekend“.
Matteo Baiocco earned also important points in both of the day’s races. He finished race one in thirteenth position before just missing out on a top ten finish in race 2, crossing the line eleventh. During the morning’s race, Matteo was unable to fight with his rivals but changes made to his bike in the interval allowed him to pick up the pace in the second race. Here following riders comments: “The weekend was more difficult than expected, but I think it’s clear that it’s not easy for us to fight against the factory bikes. Our aim is to be first among the non-factory bikes and in race two I think we came very close, the bike had improved a lot compared to race 1 in which it was so difficult to ride that my arm started to hurt. In race 2 I was fast right until the end and obtained important points. Now we go to Imola where we’ll try to approach the races in a different way, aware that our potential is great".
Christophe Ponsson and his Grillini Kawasaki came close to points-positions by ending both races at 16th spot.
World Superbike Championship will stop now for three weeks and will resume with fifth round due on May 10th in Imola, Italy.