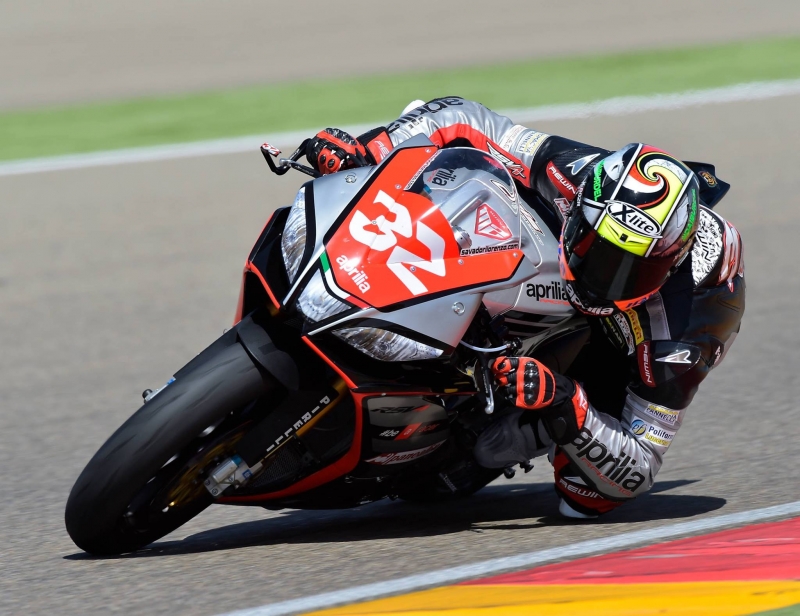 Aragon - April 12, 2015
Mission accomplished for Lorenzo Savadori!
At MotorLand Aragon Alcaniz in the opening stage of the World Championship Superstock 1000 FIM Cup, Lorenzo Savadori on Aprilia RSV4-RF New M2 Racing Team has reached the second-spot on podium after loosing the duel with Tamburini on BMW. A weekend of great work for rider from Cesena that at the end of qualifications has set the pole position with the best time of 1'52.577. Starting very well at the green light, Savadori led for over twelve rounds tailed by the fierce quartet made of Tamburini (BMW), Coghlan (Yamaha), De Rosa (Ducati) and Staring (Kawasaki). The pressure was high, but the vice-champion of the category has not missed a beat; Tamburini has been anyway able to exploit straight top speed of his BMW and has won final assault over Savadori under the chequered flag for only 154 milliseconds.
These are comments by Lorenzo Savadori: "A first important positive result in a weekend fundamental to rake in the data related to the ongoing development of a new bike but already competitive. I was a bit annoyed by the pressure put the opponents following me: we all know the value of the rivals in this years' category and I worked hard also from the psychological point of view to stay ahead. See you in a week at Assen, I thank Aprilia and the entire New M2 Racing Team for the valuable work done during the stay in Spain. The result is dedicated to all my sponsors, my working group and the many fans. "
Solid debut was also for the drivers Bryan Staring, sixth on the Kawasaki ZX 10 Team Pedercini and Jeremy Guarnoni, ninth riding the new Yamaha R1 of Team Trasimeno. Unfortunate instead was French-men Matthieu Lussiana involved immediately at start in a multiple accident at the first corner that put him out of the game after a good qualifying in the previous days.
Next meeting with the cars of the Superstock 1000 FIM Cup by return mail on 19 April, with the race on the asphalt of the famous TT Circuit Assen (Netherlands).