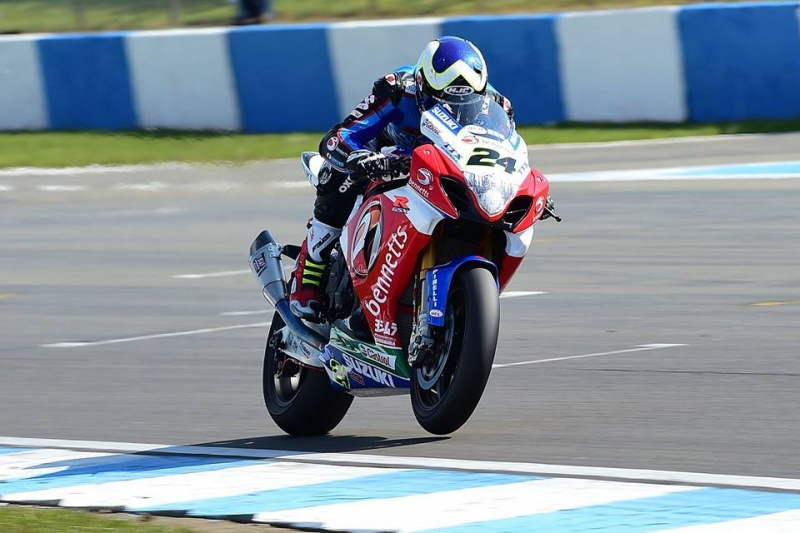 Donington Park - April 6th 2015
The Bennetts Suzuki team made its MCE British Superbike debut at the opening round of the series at Donington Park, with Christian Iddon riding his GSX-R1000 to a top five finish in race two.
From his third row grid spot, Iddon was circulating inside the top 10 in the early stages. After dispensing with Tyco BMW's Tommy Bridewell, he found himself behind Peter Hickman in a battle for fourth place. The pair made progress towards the leading group but Iddon was unable to put himself in a position to make a pass, instead settling for fifth place and a positive start to the season.
Despite suffering from illness throughout most of the weekend, Iddon still managed to convert his 13th placed qualifying position into a top 10 result in race one, coming through the pack to finish seventh.
Christian Iddon said of his first race weekend with the new team, "To be honest I'm absolutely over the moon with the weekend. Through being ill we didn't get the work done that we wanted to in the first few days, so we actually came to race day without the setup that we should have had as I couldn't spend enough time on the bike. I was very happy with seventh in the first race because it was a solid start to the year. We made some modifications between races and the guys have done a mega job with the bike. It was just brilliant in the second race. It was so good it almost rode itself and that's a credit to all the guys, and I'm really happy with fifth. I'm looking forward to Brands now and a weekend where I can smile a bit more and stand up straight."
Team Manager Jack Valentine said, "It was a bit of a shaky start and unfortunately on Christian's side of the garage we had a really sick rider. He was doubled up with stomach cramps and all sorts. At one point I didn't think he was going to make it out on track on the first day. He had a good showing with a seventh place in the first race and moved up the grid as well so that set us up well for the second. The team made some changes before the second race, which obviously worked, and his lap times were really consistent. There's no question that if he was on the back of the leaders he could have run with them, because the lap times were there. It was a very good fifth place with a really sick rider.
The next roundtakes place on 17-19 April on the Brands Hatch Indy circuit.