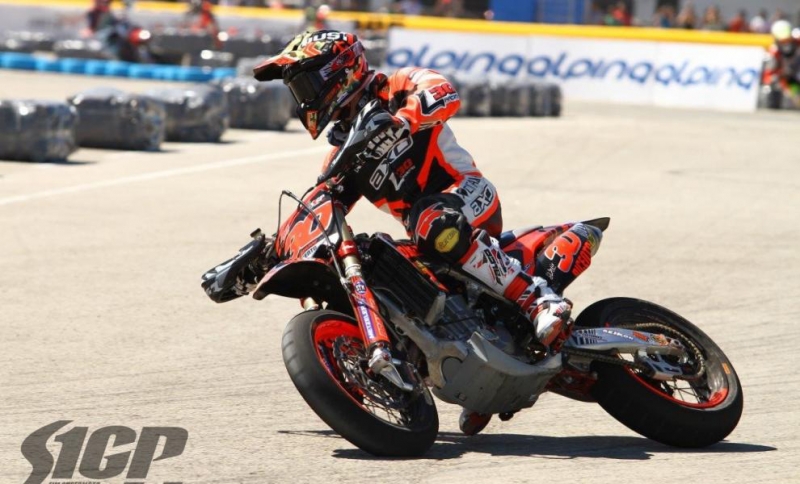 Jerez de la Frontera - March 29, 2015
Roaring start to the racing season for L30 RACING TEAM, after the red plate of italian championship leadership achieved by Ivan Lazzarini less than seven days ago, the opening round of World and European Supermoto Championship held in hot Jerez de la Frontera, ended with a double podium.
Saturday qualifying opened with an extraordinary second place by Yuri Guardalà immediately at ease both with the spectacular Iberian tranck and with his new Honda Red Moto CRF 450. In World Championships Lazzarini had a difficult start as his Saturday did not go beyond a fifth starting position on the grid.
On European's Sunday Race 1, Guardalà started very well gaining the second position and holding it till the chequered flag, despite the attacks of opponents showing great concentration. In Race 2 Yuri clicked into third place and when it finally looked like the time of the attack, a slip relegated him in sixth place. The rider did not give up, tried a furious comeback in the difficult town-track and after a few passes and another slip it finished in sixth place but earned him the third step of the podium of the day and of the Championship standing. In World Race 1 Ivan gained sixth place at the end of the first lap, then went immediately into fifth and kept it till the checkered flag. Disqualification for the Czech Keijmar finally gave him the fourth place. In Race 2 Ivan made yet another miracle, shooting in the third position and the first lap on the dirt road passed over to second spot with a beautiful maneuver against the World Champion Thomas Chareyre and with a frenetic pace, ever held throughout the weekend, won second place in the heat and overall GP: the best ending for his personal Gp nmuber 100.
Here is the comment of Lazzarini: "I thank my whole team for support in this weekend. Two days were difficult, a track where the feeling came only to the second round. This race was important for me, whatever the result would have been dedicated to a special guy, a true fighter, only 18 years old, one of my fans, who had promised a day in motion with me if he defeated the disease but unfortunately he didn't make it. Thanks Andrea, you gave me the strength I needed to get on the podium, and this second place is for you. "
The next round of the World Cup is scheduled for April 25th/26th in Ottobiano for the Italian GP.