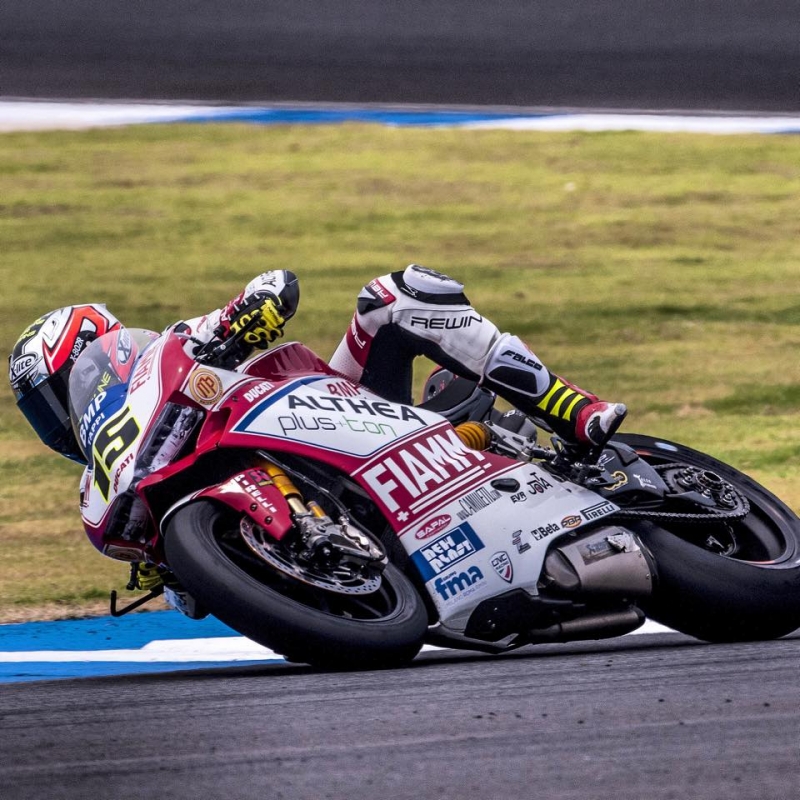 Buriram (Thailand) - March 22nd 2015: The second round of the World Superbike Championship at the Chang International Circuit has ended with positive results for Matteo Baiocco, the first Ducati machine to cross the line in both races.
In Thailand, high temperatures and humidity did not prevent FALCO rider from achieving two solid results: starting from twelfth on the grid, was able to improve lap after lap to conclude race 1 in sixth place, and race 2 in eighth, the first and only Italian to cross the line and the first of the Ducatis. In race 1, Baiocco made a great start before battling with champions of the likes of Troy Bayliss (factory Ducati) and managing to get the best of factory Kawasaki rider David Salom on the very last lap, recording his fastest lap in the final stages and proving that he was in great physical shape for this tough round. He repeated the performance in race 2 after a great battle with the former WSBK champion Troy Bayliss.
Baiox #15 has positively commented: “I’m pleased to have made continuous improvement throughout these two races. Even in qualifying we saw that that we could be inside the first eight and we are able to achieve this in the races too. I made two good starts, keeping pace until the end. I have grown a lot since Phillip Island and now we head to Aragon in high spirits. I am also very pleased for the Team as the guys have worked really hard, the bike was working well and to be the first of the Ducatis across the line makes both me and the team very happy.”
The Thai weekend of Leandro Tati Mercado at the brand new thai circuit was completed with two positive results within the top ten. The Argentinian, who started the race from the tenth spot on grid, was able to confirm the position in both Race 1 and Race 2.
The Barni Racing Team flag-bearer, who even with the high temperatures didn’t suffer too much the difficult track conditions, liked the circuit since the very beginning, with its fast sectors, alternated to more technical parts. Since the first practices during Friday, Mercado led a great performance, ending day one in 11th position and concluding the last free practice session with the 8th time. Thanks to the job done together with the technician of the team from Bergamo, the Argentinian was able to constantly improve during the whole weekend, growing even more his feeling with the bike necessary to be able to push and get closer to the fastest riders.
The start from the forth row during Race 1 was not that easy for Leandro Mercado, who finished off track to avoid to get involved into a contact. Back in the 15th position, the Argentinian was able to remain stuck to the riders in front of him and finally to overtake them till the 10th place. In Race 2 Mercado repeated his morning result, ending again 10th after battling first with Matteo Baiocco (Ducati), David Salom (Kawasaki) and then with the great Troy Bayliss (Ducati).
Here following are the comments from Tati #36: "I am really happy, This weekend was really positive. From Friday till today my feeling with the bike has improved a lot. Race 1 went well even if I had some problems with the front. In view of Race 2 we did some changes that permitted me to have a better pace. It was a nice fight with Baiocco, Salom and Troy Bayliss. At the end of the race I tried to stay with them, but the gap increased and I couldn’t remain with them till the very end. I am satisfied of the steps forward that we are making. I hope that we will continue like this also in the next races. Obviously, there are still things that we need to improve, but I am happy with the great progresses that we have already made. Thanks to all the team for the job done and to everyone who helped me being here“.
The frenchmen Christophe Ponsson of the Grillini Racing Team started the racing weekend at Buriram with the right way fighting for the points places in Superpole but with the outcome of an unlucky race-day on Sunday: in race 1 Ponsson crashed while he was 13th and unfortunately the bike #23 was destroyed in the crash, and the mechanics were forced to rebuild it from scratch in all its components.
A great job, completed a few minutes before taking to the track in race2, but after a few laps the appearance of some problems on ZX10-R forced Chriss to retire. Two unlucky races, but rider and team have shown that they have made a huge step forward from the opening round in Australia.
After the two venues out of the European borders, the EnI FIM World Superbike will get back on stage on the 12th April at Aragón Circuit in Spain.